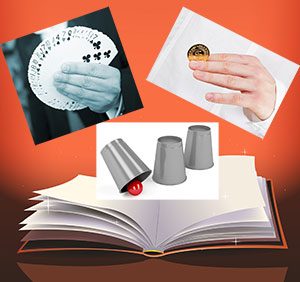 If you ask a dozen magicians how to become a magician, you’ll probably bet 12 different answers. So what I’m going to do is tell you how I did it. That’s the only truth for me. And I know it works. I believe it will work well for anyone who really wants to be a magician.

One benefit of my advice is that I’m STILL becoming a magician :-). As I write this, I’ve only been into magic for 2 years and 9 months. So my experience is extremely fresh and relevant – filled with up-to-date resources and opportunities. My first day in magic was Nov 9th, 2014.

Speaking of first days in magic, you may well be wondering what you should do on your first day – taking the first step on your journey to becoming a magician. Great question:).

On my first day, I joined an on-line forum. That’s a great way to get quick access to real working magicians with tons of experience who are ready and willing to help total newbies.

So which forum should you join? I’m going to recommend The Magician’s Forum. Yes, there are several others out there. But if you want a forum whose underlying philosophy is to be kind to each other and help each other out without being a jerk, then this is the forum for you.

I started on another forum that is also good (The Magic Cafe), but has a lot going on and has so many different folks involved that you do get the odd troll or grump that could easily discourage a timid young magician-to-be.

I was told on my first day by a quite successful magician that if he had me sitting by him on a couch, he would plop a copy of “Tarbell” on my lap and say “start reading.” I immediately took to the web and found a pdf download of the first book in the Tarbell Course In Magic.

That was my first magic “book” mainly because it was immediate gratification:). You can get your immediate gratification here.  The Tarbell Course was a mail order course started in the 1920s! But amazingly, many (if not most) magic tricks today can still find roots in Tarbell. Plus, what I found to be the most inspiring in that first volume was not the teaching of any tricks. It was the general information on what it means to be a magician. Tarbell says “there is a big difference between being a magician, and man [someone] who does tricks.” He goes on to say things like: you can give medicine to someone, but that doesn’t make you a doctor. Harlan Tarbell sets you on the right path with the right attitude.

There were two other books I got as soon as I could. I already mentioned in my post Coin Tricks: Your First Book, that for coins, you definitely need to have “Bobo,” by which I mean Modern Coin Magic, by J.B. Bobo. The other book I got was for card magic – Card College 1 by Roberto Giobbi. The link for that book is for a pdf version WITH VIDEOS:). Hooray for immediate gratification again.

Know What You’re Taking On

Besides diving into the resources to get started, you need to really – and I mean REALLY understand what you are going to have to do in order to really become a magician.

One thing someone on a forum told me BEFORE I decided to take the magic plunge really stuck with me. He said that it takes 5 years to master the basics. I don’t know where he got that, other than his own experience. But other magicians seemed to agree. This doesn’t mean you can’t learn specific tricks almost immediately. But there is a set of skills – both physical and mental – that you’ll need to acquire before you achieve what that magician called “mastery.”

In Malcom Gladwell’s book, “Outliers,” he contends that it takes 10,000 hours of deliberate practice to become world-class in something. It’s more of an observation than a rule. But if you think of magic in this way, you’ll be in the ballpark. It’s in line with the comment that it will take 5 years to master the learning in magic. As someone who is half way through that 5 year period, I can tell you that there are many physical skills that simply take so much practice to do well that most “normal” people probably would give up before getting anywhere close.

This is especially true for sleight-of-hand magic. The handling of cards and coins can take you down any of several rabbit holes. Certain moves that magicians make look easy, can be maddeningly difficult to learn to do properly. I am referring to things like how to conceal coins and cards (and other props) and creating illusions with them.

I understood that I was going to be in for thousands of hours of practice. I’m a musician who plays guitar. In order to learn to play a musical instrument, you have to put in the time. If you look at it like that, you’ll be fine. One REALLY great thing about practicing for magic though (with a few exceptions) is that you can do a lot of this practice any time. For example, I practice for hours every night in front of the TV. Coin moves don’t require any special place. You can do a LOT of practice walking around at the store, etc. Heck, you can (and should) palm a coin or card during much of your day pretty much every day until that becomes natural to you. I should warn you not to do this while driving a car though. Do as I say, not as I do:-P.

A magician named David Stone compared learning card magic to learning the basics of the English language. He says it’s easy (from a Frenchman’s point of view – he’s French :)) to get the basics of English. But then it gets much harder as you explore the subtleties. There are “self-working” card tricks that anyone can do. You can learn them in minutes. But the more you get into card magic, the more complicated it gets. Coin magic, he says, is more like learning German. The basics of that language are difficult to learn. But once you learn those basics, the rest of the language seems easy to learn.

In addition to learning the necessary moves fundamental to magic, there are things sometimes called “flourishes” – like card fans, fancy cuts and shuffles, etc. Those things don’t always help with the magic. They often are there just to look cool.

Many famous magic teachers such as Tarbell go so far as to say flourishes fall into the category not of magic, but of jugglery. You can be a magician without juggling. In fact in certain card situations, the more you show off with fancy cuts and fans and springs and spins and shuffles (things the kids call “cardistry”), the less effective your magic might be. You’re giving away the fact that you can really manipulate cards, so any illusions inherent in the actual magic will be less stunning that it might be if you just handled the cards like any normal person would. Then when the illusion happens, it hits with a harder impact.

Is It Just Physical Stuff I Have to Learn?

But it’s not just the physical stuff you’ll have to learn. There is a lot of other stuff to. First, you have to be able to – or learn to – perform to some degree. It also helps to make people laugh. Those skills can take time to master. And then you need to understand the psychological aspects of magic. Why does it work? What is going through the mind of your spectators at various points throughout a trick? For an absolutely FANTASTIC book on this topic, I highly recommend “Sleights of Mind: What the Neuroscience of Magic Reveals about Our Everyday Deceptions.”

So that’s a lot to think about for what I initially described as your first step. To summarize:

Commit yourself to this. Understand that it will take you 5 years to really master the learning phase. That doesn’t mean you can’t start performing magic in the first weeks and months after you start. But to really become a well-rounded magician, allow that certain things will take years of dedicated practice. If you start out with this understanding, you won’t get discouraged when you can’t do a 2-handed card fan classic palm a coin even after working on it for a really long time. Just be confident that every magician who can do these things today, was at some point where you are now.

And it doesn’t matter what age you start. I was 50 on the first day of my magic journey 2 years and 9 months ago.

What are you waiting for?

This site uses Akismet to reduce spam. Learn how your comment data is processed.